Get this in your inbox next time

“Let’s be a media company” and “content is the product” seems to be a big call to action from marketers laterly.

One of the biggest advocates of this recently has been Kieran Flanagan from Hubspot:

Here he is earlier this month:

And hey, some of these people saying this are people I interact with regularly on the socials (not Kieran)

But let’s look at actual media companies for a moment.

Those that don’t have a “real” product beyond the value of the information.

Why do I keep bringing this up? Aren’t layoffs happening everywhere?

Most media companies have undergone rapid consolidation & layoffs over the past decades.

Layoffs have been happening in media even in boom times, before content marketers started thinking they needed to be media companies. For instance, the employment at U.S. newsrooms has decreased 26% since 2008, and though digital-first publications have been on the rise, they haven’t made up the difference.

“Hey boss, look at all these media companies losing money. Let’s do that ok?”

Save that thought, and let’s keep going…

Ironically, Media Companies Have Embraced 2 Things that Marketers Have Done For Awhile Now

But media companies have turned more and more to 2 things for profits that SaaS companies have actually done pretty well with in the recent past, even though they’ve now soured on them for various reasons.

Events–from tradeshows to conferences–have always been something that enterprise and SMBs have done fairly with or at least enjoyed. My Twitter feed this week was filled with people from SaaStr, the famous startup conference started by Jason Lemkin.

The previous week my feed was filled with people at Inbound, the Hubspot gathering ground.

Those conferences have helped launch several notable SaaS companies (I remember ClickUp going in 2018, right before I joined) and Hubspot created an enviable community around its keynotes and breakout sessions on marketing.

Both conferences are more than 10 years old–long before anyone started thinking about SaaS co’s as media companies. You could, by pretty liberal standards, consider both of them as “content” even though in most honest moments, no one would refer to that in that way.

What’s ironic is that traditional media companies are turning to events for their revenue.

The New Yorker also has a festival, so does Pitchfork, the music review site.

But no matter, it’s fascinating that this old way of doing things in business is gaining ground on the media side of things.

Another area where media companies have made headway is with gated content.

“What? I have to enter my email address?”

Yes, and pay for it too.

The NYTimes has rebounded in recent years (back to their 2002 highs, I may add) in part because of subscriptions. Same for The Washington Post and Wall Street Journal.

Politico makes a lot of its money from its PoliticoPro product. It features exclusive reporting on deep policy issues that the rest of us plebes probably don’t care much about.

(I’m not sure how much it costs, I can’t find it, and I’m not talking to a salesperson lol)

But newsletters have been hot lately, too.

Substack has become (almost) a household name from these.

A bunch more that I’m missing. But it’s become a huge business!

If you want an even older-school example, I used to work for a business journal, and a huge part of the business was selling a directory every year with just random lists with tons of contact information. They are a ton of research, but are a large part of every business journal’s revenue stream and can even be up to $699 a year.

But then I ask again, what are subscriptions if not gated content?

I’m not necessarily pro or con on “gated content.” I’ve seen it derided recently and it’s actually what successful media companies are doing!

The takeaway from the suggestion that brands should be “media companies”

This could go a few different ways.

We could think of “media” as the actual medium, right?

Or we could think of “media companies” as original news, opinion, thought leadership, viral videos, listicles, podcasts, all the things really.

Media companies do well at that.

Is that something content marketers want to move into, all the way, full stop?

For some, yes. Profitwell and Hubspot are shining examples.

I’m sure there are more. They seem to be pulling off all the formats and telling us something new (or at least trying to) about our industries. They want to lose the objectivity of having an independent outlet tell you about industry trends and take it on themselves.

Do you trust them to do that? Maybe. Or it could be a branding exercise.

But what if you want to keep up with your audience, but not necessarily the trends?

You may need to increase the frequency of your contact.

As a marketer who’s heavily biased towards evergreen things, I forget this a lot of times. (This article from Marc at Powered By Search reminded me of its importance lately).

Their cadence is fixed and they meet it.

That’s one of my biggest takeaways from when I worked as a journalist. No matter what, something had to go out the door.

It can be limiting sometimes (Google doesn’t care when you publish! Break your editorial calendar!) but it’s also important to try and stay in touch with your audience on a regular basis.

Breaking Free From Your Editorial Calendar

If you think about who has actually disrupted media the most in the last few years, it’s…

…Not media companies as a collective

…with lower costs of production and less overhead

Those newsletter superstars I mentioned above? Paid, gated content, yes, but also creators.

I didn’t even talk about MrBeast or Lilly Singh or Charlie D’Amelio.

What creators do well is:

It’s good to have a niche, but not make it too niche.

If we go back to my trends point, this is something that Hubspot hasn’t done well in the past and is obviously now leaning more into it.

Their bread and butter was inbound, starting with SEO.

They were about evergreen, not the now.

So I can see why they’re hawking this shift so much–it’s probably been a huge shift for them internally to have a more typical “editorial” production model, where The Hustle now has to come out every day, their podcasts have a regular cadence, and maybe even their videos, too.

There’s the risk of course. It’s a different form of audience building. It takes immediacy and frequency.

It’s the publication vs library distinction.

And Hubspot in particular has started moving towards the publication + library model.

Creators do this very well. They have a mix of right-now commentary with a few more evergreen videos thrown in without a lot of “here’s why our brand is best.”

So in that way, yes it’s different for a SaaS marketing department to embrace being a media company.

Should all brands be media companies?

It could be a huge waste of your resources.

The first mover advantage may have been diluted.

It also takes a huge amount of effort and time and skill to do…just like any form of marketing.

But it’s very hard to maintain that relevancy day in, day out and be beholden to the news or the day of the week.

I’m always biased towards the evergreen models. You can spend a lot of “media” resources on great videos, evergreen content, and audio.

But you could also up your frequency, start a low-cost newsletter, publish it in a Google doc, and comment on all the day’s events in a very low-budget way. And hello, you’re a media company.

It comes down to a matter of definitions, resources, and preferences.

And with that, I’ll stop.

Get the Growth Content newsletter in your inbox: https://growthcontent.gumroad.com/l/fvwtk

One thing I’ve been incorporating more into my briefs are questions. Turning to the People Also Ask (PAA) questions within Google can give you a great headstart on creating your briefs and more insights into what people are searching for. You are probably familiar with PAA questions even if they don’t show up on all…

Intro Keyword research? New topics to write about? The two blend together for me. One leads into the other and then back again. At least that’s how I work. Below are a few of the keyword research techniques I use. Sometimes these will match up perfectly with your familiar keyword tools. Other times (like my…

My newsletter subscribers got this first! Sign up here for free. Recently, my Twitter pal John Henry from Growth Plays pulled out a gem of a tweet thread. If you don’t know John Henry, he spends more time in large enterprise accounts than a raccoon in dirty dumpsters (that’s a compliment). His tweets were about “What is” content and their… 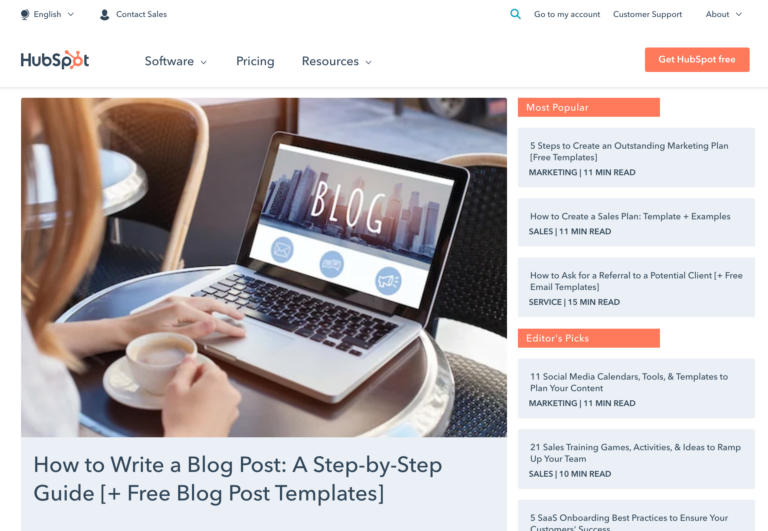 If you’re in content marketing, you must be familiar with Hubspot. They basically defined “inbound marketing” in the 2010s.  They relentlessly beat the drum about awareness, consideration, and decision content.  The playbook was this: the “writer” on the marketing team would go through Hubspot Academy to learn how to write content to address different parts…

Someone the other day mentioned to me how a group of people sat in a room and came up with blog posts for each quarter.  Whatever sounded good, they would do.  Almost every day I hear about companies who do this. I get that impulse. It’s fun. Freewheeling.  If you know your audience, your industry,…

Reset your expectations about what your content should do. You need: More leads from search. And social. And email. You’ll take any lead from anywhere. I know that desperation mode. How do you find the way out? Spray and Pray: Please Let This Be The One When you’re that scattered, you’re hoping that anything and…